A rice cooker is a useful and sophisticated household gadget that is still worthwhile purchasing to cook pasta or rice. It offers numerous advantages while cooking other dishes in addition to rice. It eases the cooking process. 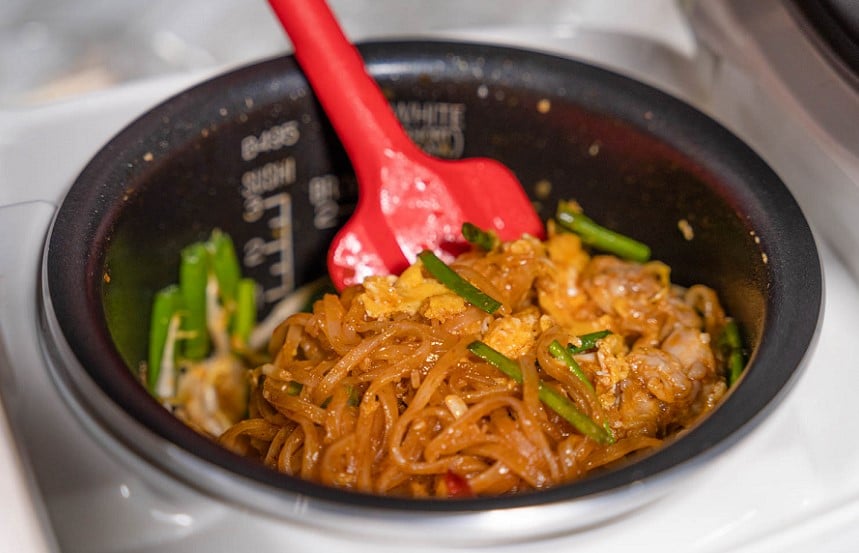 It is natural to cook rice in a rice cooker that it is initially devoted to.

Depending on the sort of rice you’re cooking, you should use a specific amount of water for the rice.

The ratio to cook pasta is the same as for stovetop cooking. You can therefore estimate how much pasta you can make based on the size of your cooker.

Yes, you can cook pasta using the regular “rice” option.

This capability, nevertheless, is restricted to only cooking little amounts of pasta. If you are only cooking for one or two people, this is perfect.

No matter how big or how it works, the cooking process is the same for pasta and rice. 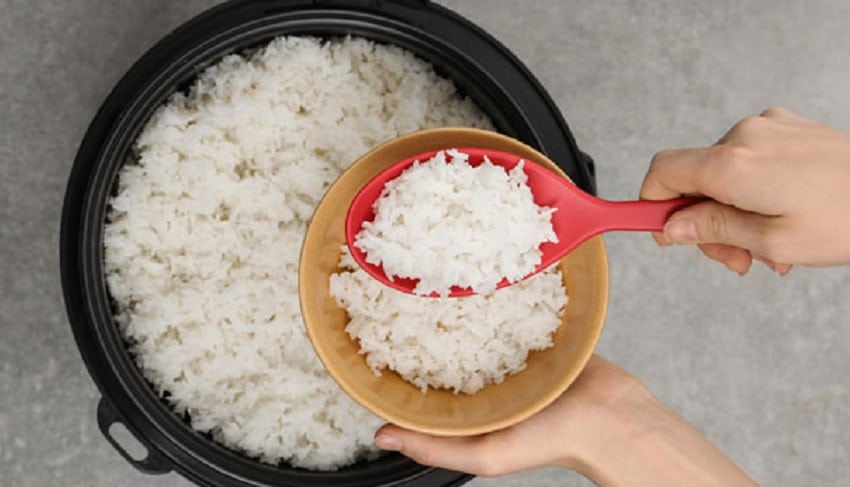 What kinds of pasta are good for cooking in a rice cooker?

You can cook any kind of plain pasta in a rice cooker. Choose pasta in little forms for the best results:

All of these pasta varieties cook best in the rice cooker because they are the smallest and fit in it the easiest. They won’t swell significantly in boiling water, preventing them from getting stuck inside the rice cooker when you want to cook pasta.

It’s a good idea to break up larger pasta varieties, like spaghetti or linguine, into manageable rice cooker-sized pieces before cooking. Check to see if the broken pieces are the right size before adding the pasta to the rice cooker.

Add some basic pasta sauce to the chosen type of pasta as another wise move. It is a good idea to give it a try because many rice cookers work well for making one-pot meals. Add olive oil to your taste in the end. 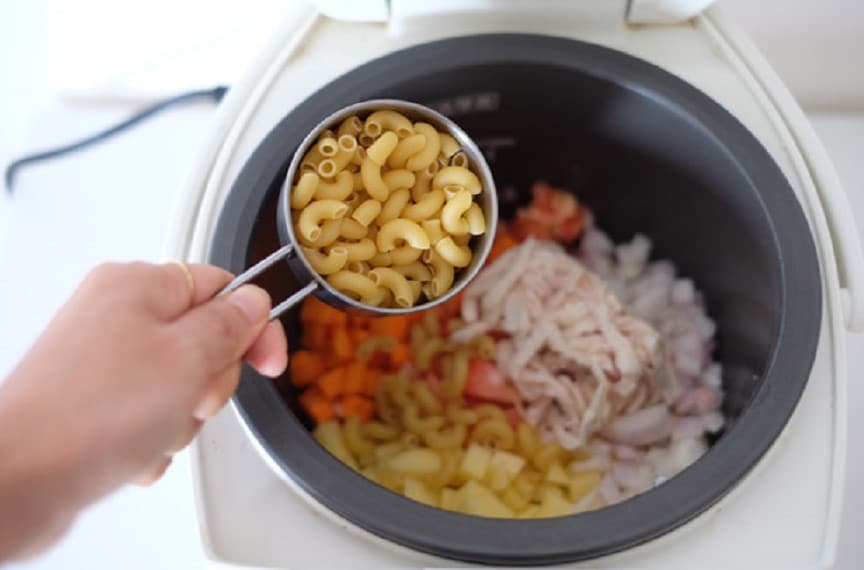 How long does it take to cook noodles in a rice cooker?

There is no exact answer to this question, as the cooking time can vary depending on four main factors:

Depending on the brand of your rice cooker, the kind, and quantity of pasta you are cooking, and other factors, the precise time it takes to cook pasta in a rice cooker will change.

If you decide to bring the water to a boil before adding the pasta, you would just cook the pasta for the number of minutes noted on the box, which is often between five and eleven minutes. When using the rice cooker to simultaneously heat the water and pasta, like in the basic instructions above, expect it to take longer—roughly as long as it does to prepare rice. 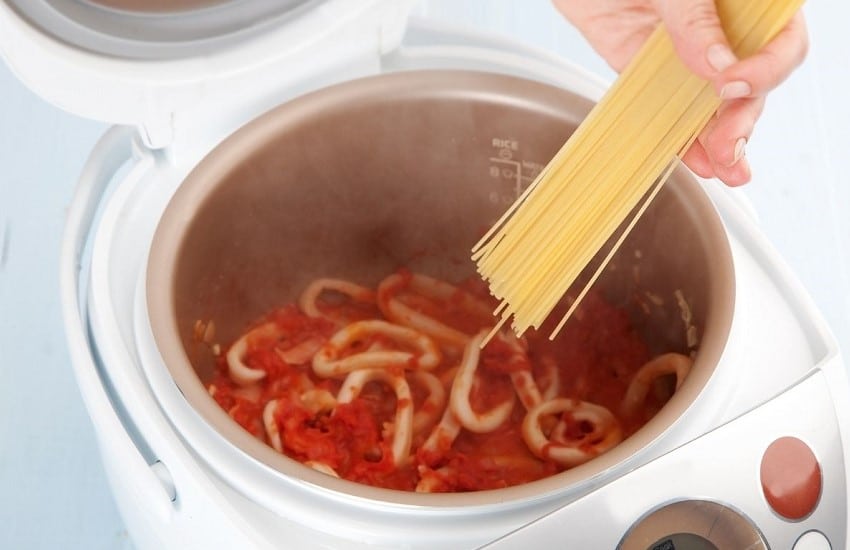 How to cook pasta

Remember that not all rice cookers are made equal as a starting point.

They come in sizes ranging from three to ten cups, and some models may have extra features and functionality that have a significant impact on the quantity and variety of pasta dishes you may prepare in your rice cooker.

If the owner’s manual for your particular rice cooker model has any instructions for cooking pasta, make sure to use them for the best results (you can usually find them online).

Find Out How Much Pasta Your Rice Cooker Can Make

Similar to rice, the pasta will swell as it absorbs water and cooks. To be safe, assume that the pasta will increase in size by at least doubling while cooking in your rice cooker. Your rice cooker may overflow, the pasta may not cook properly, or both if you attempt to cook more pasta than it can accommodate.

If your rice cooker is very small, start with only half to one cup of dried pasta the first time you use it to make pasta. After a few tests, if you are confident that your machine can process more pasta, you can increase the amount of pasta. 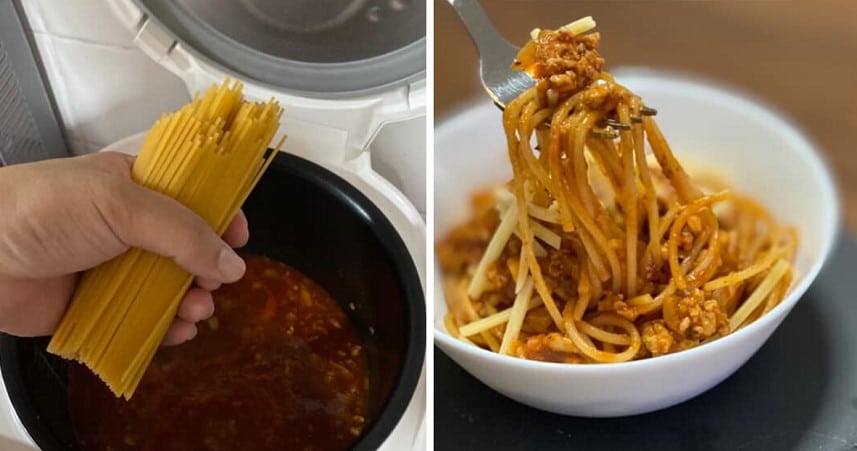 Some testing will also be necessary for this. When cooking pasta, unlike when you cook rice, you usually don’t measure the water precisely. Additionally, the ratio that your rice cooker suggests for rice won’t necessarily apply to pasta.

After placing the pasta in the rice cooker, be sure to completely cover it with water. 1/8 to 1/4 inch above the pasta is a good place to start, but if you want your pasta al dente, you might want to use a little less.

For flavor, sprinkle on a little salt. When cooking pasta in a large pot of water on the stove and draining it afterward, use less salt. The rice cooker should completely dry out, leaving the pasta with only the salt you’ve added.

Add a teaspoon of oil. This prevents the pasta from foaming and possibly filling the rice cooker to the brim.

Press the “Start” button after sealing the lid

The “start” button on your rice cooker can be marked “Cook,” “Cooking,” or some similar phrase.

If your machine has other menu options you need to select from first and doesn’t offer pasta-specific choices, such as rapid cooking or the setting for making basic white rice, pick the option that is the shortest. If your pasta isn’t done, you can always push the button again to continue cooking.

Check the pasta as soon as the timer sounds, and if it’s done, shut off the rice cooker. The pasta might burn on the bottom if you leave it on the “Warm” setting like you would with rice.

It’s time to eat if the pasta has the texture you like and the water has all been drained away.

If there is still any water present but the pasta is cooked, drain it out and make a note to use a little less water the next time.

If the pasta is not sufficiently cooked, toss it, if necessary, add a little more water, and hit the cook button once again. Especially if it appeared to be almost ready the first time, you should probably check it again before the timer goes off. 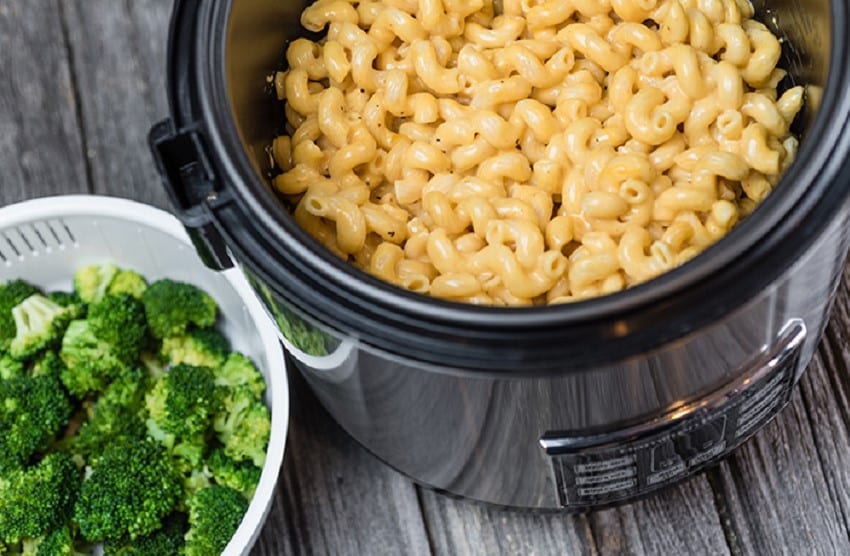 What other foods can you cook in a rice cooker?

Basic rice cookers can cook most foods that require combining a dry ingredient with water or another liquid, such as quinoa, oatmeal, farro, and of course, pasta, in addition to all varieties of rice.

Some rice cookers also have the ability to sauté meat and veggies, allowing you to create more sophisticated pasta, rice, and other dish recipes. Many people also steam vegetables in their rice cookers and depending on the model, you might even be able to bake a cake in it.

What can you not cook in a rice cooker?

It can not only cook pasta or prepare nice rice cooker recipes, cooking rice is of course its main duty, but it can barely cook everything! The rice cooker, fortunately, is not a one-hit wonder.

Yes, it consistently produces flawless rice, but it can also produce other foods such as quinoa, pancakes, eggs, chicken, and even chocolate cake. Surprised? Make your pasta al dente, and enjoy the cooking process!

Following the directions in the user manual, using too much sauce or oil, and waiting an excessive amount of time before removing the noodles from the rice cooker are some frequent mistakes people make while cooking spaghetti in a rice cooker.

To determine when your rice cooker is finished cooking, carefully read the directions that came with it.

You can extend the cooking time by a few minutes if the spaghetti is still too firm for your tastes. 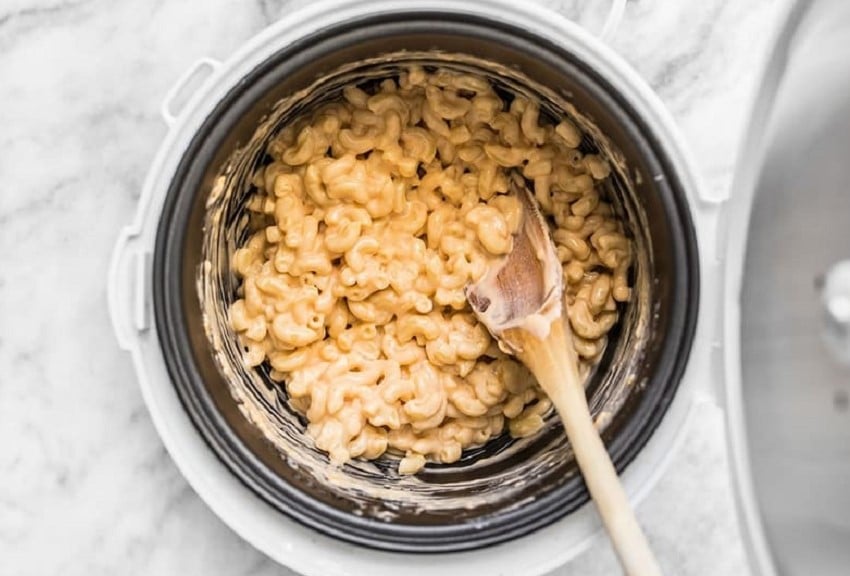 As you can see, a rice cooker is a handy and versatile kitchen tool that is good for cooking pasta and some other dishes. Perfectly cooked rice or pasta sauce for the cooked pasta – all possible to conduct! The rice cooker cooks almost everything.

A rice cooker is an ingenious piece of equipment that has numerous advantages for your home. Over time, you’ll realize how useful and helpful a device like this is for cooking rice and other meals.

You’ll be astounded by how adaptable these gadgets can be when you cook pasta. After cooking is complete, your food will be kept warm so that you won’t have to serve your favorite meal cold. Purchase a quality rice cooker and take advantage of its adaptability.